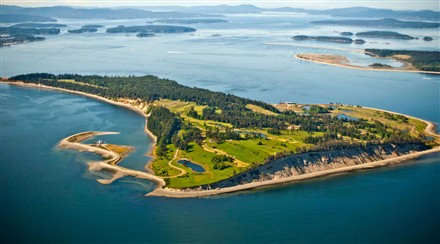 Craig and Susan McCaw have listed their 780-acre private island off the coast of Vancouver, British Columbia, for $75 million.

Known as James Island, the property is about a mile off the coast of Vancouver Island and has a private Jack Nicklaus-designed golf course, sandy beaches, an airstrip and a marina.

There is a four-bedroom, 5,000-square-foot main residence built from reclaimed cedar, a large warehouse that has been converted into an entertainment center, a gym, a store, staff accommodations and six guest cottages.

Formerly the site of a World War II-era dynamite plant, the island once had a population of roughly 800.

In the 1980s it was partially developed into a resort. Mr. McCaw, the cellphone-industry pioneer, purchased the island in 1994.

Mr. McCaw said in an email that his family "adores being on the island" but are selling now because they "have the perfect storm of kids' activities and no one wants to be left behind."

Via WSJ - Mark Lester of Sotheby's International Realty in Vancouver has the listing.