Not many people know about the Dalmatian hinterland in Croatia. For centuries, it was considered unimportant, though it deserves to be presented in all its glory, from the valuable heritage which witnesses to the dramatic historical events which took place here, to the majestic diversity of its unspoilt landscapes. Southern Croatia, also known by the name of Dalmatia, is the land of sun and sea with a thousand islands. It is protected by a wall of coastal mountains. But what lies behind this wall of mountains? If anybody questioned this at all, hardly anyone researched the answer. We shall take you to this region behind the mountains. The most beautiful area of the Dalmatian hinterland is the one of the District of Cetina. Cetina is the river which gave this area its name and life. Between the mountains of Svilaja and Dinara there lies a valley which is made up of fields connected by the river of Cetina. Yielding under the mountain range confluent streams flow into the Cetina. They irrigate the surrounding fields, turn the mills and turbines and provide water for the people and animals; these waters are a mirror and jewellery of the District of Cetina. While in the fields water rule, in the mountains it is the rock. Lime-stone shows so much richness in shape, the kind that you can only see in a picture-book of rocks. Walking in these areas we pass through the table-lands, we see canyons, skip over cracks in the limestone, go down into ditches and caves, and we can rest our tired feet mudded with red soil in the quiet glens. The mountains are a great place for cycling, rock-climbing, hiking and walking; the fast-flowing rivers are ideal for rafting, canoeing and kayaking; the lakes are suitable for rowing, and the fields and woods a perfect place for horse-riding.

The Dalmatian hinterland is a paradise for hedonists, whether those who love nature, activity and seeing the sights, or those who enjoy good food. The arambasici of Sinj and the knights' tournament known as the Sinj Alka are on the UNESCO list of protected Croatian intangible heritage. Local fare includes meat and vegetables roasted in the oven under a baking dome, Dalmatian prosciutto, cheeses, pies, the inevitable wine and, from the rivers and lakes, frogs, trout, crayfish and other delicacies to make life sweeter.

The knights' tournament known as the Sinj Alka In August 1715 a battle for the fortress of Sinj, which had a strategic position on the main road to the coast, ended in a Turkish defeat. In commemoration of their great victory, the people of Sinj instituted the Alka tournament. The Alka tournament has long since, and particularly in recent times, ceased to be simply a picturesque local event. Drawing upon, in general terms, the medieval tradition of tournaments and horsemanship competitions (carousels), the Alka of Sinj combines several features that attract the attention of the general public: the costumes of the contestants and their escorts, the splendidly caparisoned horses, the commemorative, legendary and sporting aspects of the event itself, the heroic spirit and traditions of the environment in which it has been preserved. Every year, on the first Sunday in August, this tilting competition takes place in the town of Sinj, brilliantly costumed knights (alkari) competing according to tourney rules preserved over the centuries. This tilting ceremonies last for three days. It has run without pause since 1715. The Iron-ring (Alka) symbolizes the victory of the people of Sinj and Cetina under the protection of Our Lady of Miracles of Sinj, over the Osman army. With this victory, on 14. August 1715, not only Sinj and Croatia were saved, but Europe as well. That is why the Alka is not just another folk festivity, the tinkling of gold and silver on the Alka uniform is the apex of national traditions. It is the victory of freedom over captivity. The winner of the tournament is the alkar / knight who gathers the most points in three races. The hit in the center of the iron-ring brings you 3 points, 2 points if you hit the top section of the target, and one point for hitting bothside sections. Besides that, the iron-ring can be missed and that is 0 points. If, at the end of all three races, the riders have the same number of points, they take turns until one wins. The Duke of the Alka puts the Croatian tricolour with the Coat of Arms on the „Spear of the Hero", the triumphant winner. He is celebrated throughout the whole year, until the next tournament. For the foreign visitor, the Alka tournament is a picturesque remnant of the past, an opulently costumed pageant far removed from everyday life, a romantic flight from the traumas of our age; for the people of Sinj and the Cetina district, it is a recurring event, new each time. As such, it has become a kind of public manifestation, to be experienced every year a new, never aging, a part not only of history but of all time. The Alka tournament has also been declared a historical monument of the highest order.

One of the most interesting sights in the town of Sinj is Villa Tripalo - a Secessionist building dating back to the 1920s, situated in a quiet corner less than 100 metres from the main square in Sinj, occupying a site covering more than 4,000 m². Restoration work on the villa began in 2007, following conservation and restoration research, with the primary aim of reproducing the original appearance of the villa as far as possible, both externally and internally, during the renovation work. With the help of builders and restorers licensed by the Ministry of Culture, the villa has been restored and transformed into a building worthy of visitors to Dalmatia of refined taste. The entire property is surrounded by a stone wall and it can be rented. The original single-storey outbuilding, formerly used to store garden tools, has been transformed into a comfortable guest house and swimming pool, with all modern conveniences.

The villa is a memorial to the Croatian politician Ante Miko Tripalo, the leader of the "Croatian Spring" movement, whose bust stands at the entrance. The interior has been decorated throughout with geometric patterns and motifs from the plant world, which were rediscovered during restoration work, and implemented in order to reconstruct the original appearance of the rooms as far as possible. Villa Tripalo is characterised by period woodwork, particularly the external and internal door-frames, with brass features, decorative carvings and panels in the Secessionist style. The wrought iron features of the house are also all original, including the outer gates and basement window grilles. The villa has been furnished with period pieces and top quality Baroque and Empire style furniture, finished with carefully chosen textiles. The final touch is given by the carefully selected period tableware and light fixtures. Works of art by eminent Croatian painters and sculptors add a special value to the house. 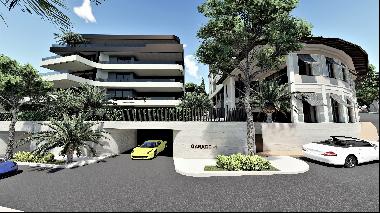 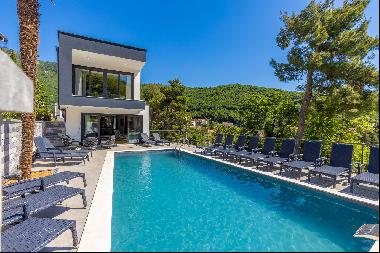 Modern Villa With Pool Near The Sea - Opatija Riviera 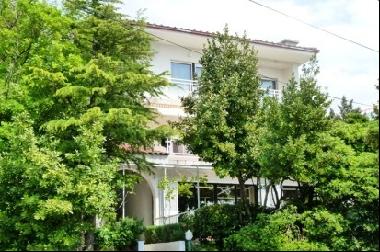