The Wave in Vejle, Denmark by Henning Larsen Architects 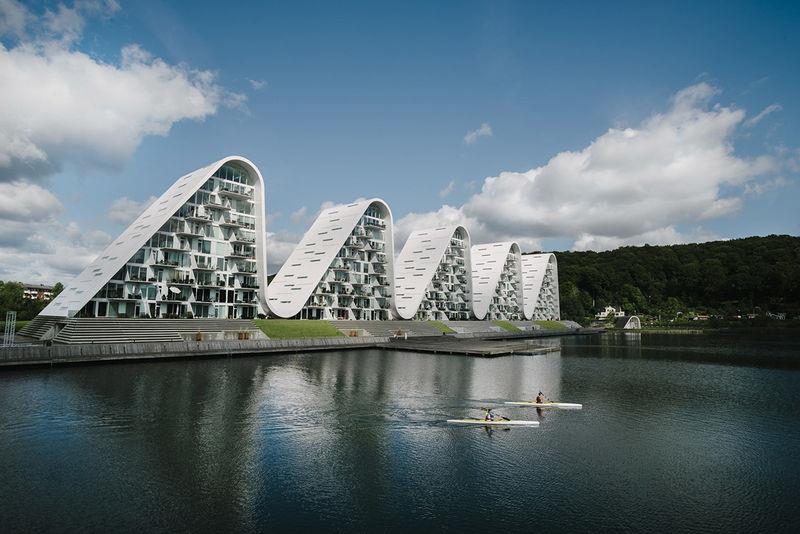 The opening of the building marks the end of an 11-year construction process, which began in 2006.

Work resumed in 2015, two years after Henning Larsen's death in June 2013. Now the founder's original vision for the project is complete, with the full complement of five crests running rollercoaster-like along the waterfront.

The Wave was designed as a new landmark for the town of Vejle in Jutland, and incorporates a public promenade along its eastern edge.

With a total area of 14,000 square metres, the scheme has 100 has apartments. Each tower has nine floors, the highest of which is a double-height penthouse apartment.

The "wave" itself is formed using panels of terracotta rainscreen cladding, providing the roof for each tower with what looks – from a distance – like a continuous white sheet.

The lip of this wave creates an eave over the largely glazed facades, articulated with balconies for each apartment that are separated by privacy screens. Thin picture windows bring light into the apartments and form skylights on the top floors.

Interiors have been kept simple, focusing attention on the dramatic views of the Fjord to the east or the town to the west. Wooden floors have been used throughout, and extend out on to the balcony areas.

In 2009, The Wave’s two completed towers were crowned ‘Residential Building of the Year’ by Danish magazine Byggeri.

The project has earned an ABB LEAF Award for innovative architecture in 2012 as well as the prestigious Civic Trust Award in 2013.