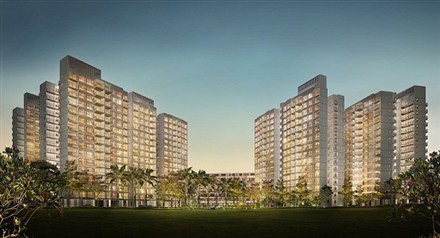 The Sim Lian Group, developers of the Centrale 8 project then reported that more than 40 per cent of the 708 units sold out.

The real estate project is located in Tampines, the largest residential area in Singapore.

Kuik Sing Beng executive director of the Sim Lian Group said that the unit sales were meeting their expectations.

He also added that units sales are expected to pick up further when the project gets its temporary occupation permit (TOP).

He added that well-located projects such as Centrale 8 would continue to be in demand because they represent good-value homes for Singaporean families.

A showroom will be opened in December for interested buyers to view the project. According to Sim Lian Group, Centrale 8′s four-room units are the most popular among buyers.

The majority of the buyers currently live in Tampines and property analysts initially expected the project to sell 60 to 80 per cent of its units given its centralized location.

Chief Executive Mohamed Ismail, of PropNex, Singapore largest real estate market share agency described the take up rate as not very encouraging, because it shows that people were sensitive to its price.

Nevertheless Mr. Mohamed added that the fact that it started with such an uproar and still managed to get over 40 per cent of the units sold is considered relatively good.