London’s gherkin on the market for £650 million

One of London’s most iconic buildings, The Gherkin, in the heart of the city’s financial district has been put up for sale.

Savills and Deloitte Real Estate have been jointly instructed to sell the building at 30 St Mary Axe in the City of London following the appointment of Phil Bowers, Neville Kahn and Alex Adam of Deloitte LLP as the Joint Fixed Charge Receivers.

Interest is expected from around the globe for the 505,000 square foot, 40 storey landmark office building which opened in 2004 and was designed by Lord Foster.

It is currently multi-let to approximately 20 tenants including Swiss Re, Kirkland & Ellis International LLP and ION Trading and offers in excess of £650 million are being sought.

Germany's IVG Immobilien, which co-owned the building with private equity firm Evans Randall, filed for insolvency last year. Although Evans Randall was willing to buy a bigger stake in the tower, it was unable to agree a new ownership plan with IVG. 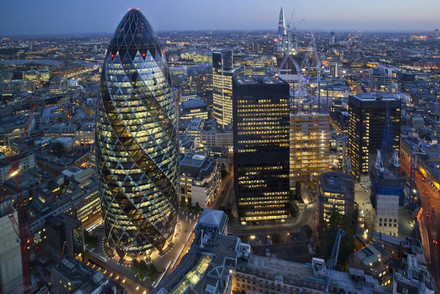 ‘This is a globally recognised landmark building, which sits in the heart of London’s business core. The central London commercial property market has benefitted from improving market conditions over the course of the last few years,’ said Stephen Down, head of central London investment at Savills.

‘Not only have we witnessed a sustained appetite from international investors for assets in London but we have seen a substantial improvement in business growth and take up of office supply as the capital’s economy continues to improve.’

According to Jamie Olley, head of city investment at Deloitte Real Estate, The Gherkin is one of London’s famous landmark buildings and the most iconic office tower in the City’s skyline.

‘For investors, this prime office property provides an attractive combination of stable and reversionary income with opportunities to add value via asset management. The property will appeal to a wide range of domestic and international investors and we are confident of maximising returns to the receivers and creditors,’ he said.