A luxury penthouse in Monaco could become the world's most expensive property per square metre when it comes onto the market next year.

Soaring to a height of 170m, the Odeon Tower will be the Mediterranean coastline's second tallest building when it is completed next year.

Topping out the block will be a spectacular 3,300 sq metre multi-story penthouse complete with private water slide and exclusive infinity pool.

One estimate for the value of this apartment suggests it could fetch as much as $360 million  when it is released onto the market in 2014.

Each apartment will boast floor-to-ceiling windows and private terraces with panoramic views of Monaco, Larvotto beach and the Ligurian Sea.

The block will have Russian and Turkish saunas, several swimming pools, private spas, a full-time concierge, private chauffeured limousines and a cinema.

Housekeeping, dry cleaning and valet services will all be organised by residents from touchscreen controls in each apartment. 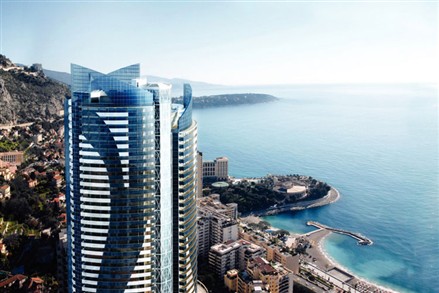