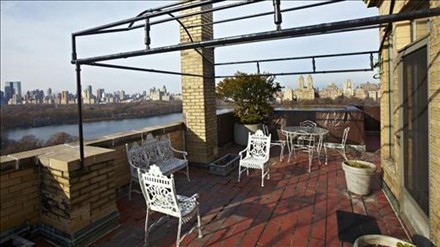 A 10-room penthouse in Manhattan that was once part of a 54-room triplex designed for cereal heiress Marjorie Merriweather Post is on the market for $29.5 million.

The three-bedroom, floor-through cooperative apartment at Fifth Avenue and 92nd Street was part of an apartment designed for Ms. Post in 1926; the space was later divided.

The 4,300-square-foot penthouse is nearly surrounded by a terrace of about the same size and has city and Central Park Reservoir views.

A gallery off a private landing opens to a living room, library, dining room and kitchen. The apartment has a staff room and bath.

A guest apartment within the penthouse, with a living room, bedroom, bath and kitchen, is accessible via the landing and could be combined with the rest of the apartment.

The seller is the estate of the late Monique Uzielli, who bought the apartment in 1959 and renovated it two years later.