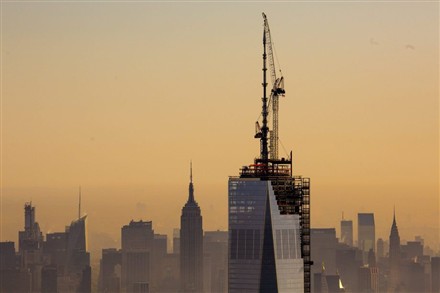 New York construction workers cheered Friday as the final piece of the spire for the World Trade Center was hoisted into place, making the tower the tallest in the western hemisphere.

Local television footage showed the huge piece, measuring 408 feet (124 meters), being craned slowly up, completing the final piece in the new jewel of the Manhattan skyline.

The skyscraper, officially known as One World Trade Center and popularly as Freedom Tower, is the lynchpin of the new complex built on Ground Zero, where the Twin Towers of the old World Trade center collapsed in the September 11, 2001 attacks that killed nearly 3,000 people.

"This really is a symbolic moment, because this building really represents the resiliency of this country," Port Authority deputy chairman Scott Rechler told NBC television.

"These people, the thousand men and women who have worked here tirelessly, really as a tribute for the people that perished on 9/11 right on this site."

The 104-story building now measures 1,776 feet (541 meters), a symbolic height chosen to echo the year 1776, when America declared independence from Britain. It is expected to open to tenants in 2014.