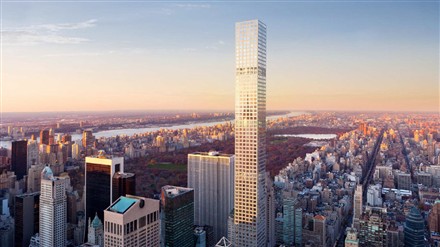 Upon completion, the 84-storey tower will be be the tallest residential building in the western hemisphere.

The penthouse will comprise six bedrooms, seven bathrooms and a library. A sculptured bathtub sits in front of a window, offering IMAX-like views of the city.

A buyer can also pick up a US$3.9 million studio for the housekeeper and a private wine cellar for US$300,000.

The building offers residents an indoor-outdoor event space with a 350 person capacity.

Developer Harry Macklowe along with his architect Rafael Viñoly designed the tower around "The purest geometric form - the square". The tower floors are 93 feet square; each side of the building has six 10-foot-by-10-foot windows.

Macklowe said he and his partner, CIM Group, already has contracts for nearly US$1 billion worth of apartments at the building, which at present only has ten floors.

Total sales are expected to surpass US$3 billion for a building that is slated to cost about US$1.25 billion to complete. Prices start at USD1.59 million for the smallest apartment, a 32.6 sqm studio.

"There's a great deal of interest in New York, which is seen as relatively cheap compared to other global cities," Yolande Barnes, director of research for Savills, said.