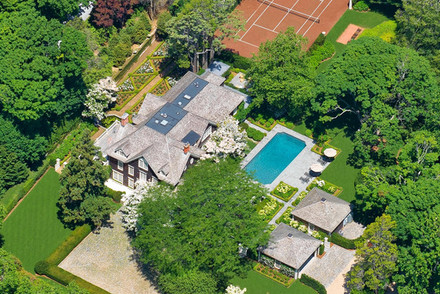 Before there was Paris Hilton, there was Consuelo Vanderbilt Balsan—a Gilded Age heiress and socialite, renowned for her beauty and wealth.

Now Ms. Balsan's Hamptons home is slated to hit the market priced at $28 million with Tim Davis of the Corcoran Group.

Located on Ox Pasture Road in Southampton, the shingle-style home was built around 1900 and is known as "Gardenside" or "Cara-Mia." Ms. Balsan, the great-granddaughter of railroad magnate Cornelius Vanderbilt, owned the house until her death in 1964.

The estate is owned by Robert G. Goldstein, executive VP and president of global gaming operations at Las Vegas Sands Corp, and his wife Sheryl, who purchased the house in 2007 for $17.4 million.

Mr. Davis said the house underwent a major restoration and renovation when the current owners bought it, with new plumbing and electrical systems and the addition of an elevator. Original details remain in the home, such as the parquet wood floors.

Located on two acres, the three-story house is roughly 9,000 square feet, with 7 bedrooms and 11 bathrooms.

The master suite is about 1,500 square feet, he said, with his-and-hers dressing rooms and bathrooms and a terrace overlooking the garden. The house also includes porches and outdoor entertaining areas.

On the grounds there's a gym, a red-clay tennis court, and a heated 45-foot pool with a bluestone terrace surrounded by white hydrangeas.