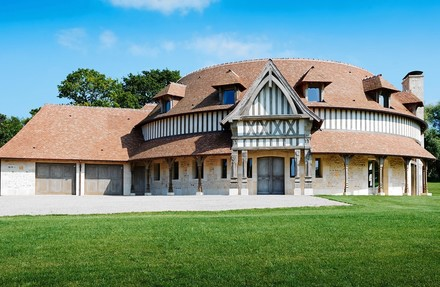 The French town of Deauville will always be associated with French director Claude Lelouch : His 1966 Oscar-winning film "A Man and a Woman" was largely shot on the town's beach.

Now Mr. Lelouch is selling one of his properties here, a surreal round house on a 10-acre estate for $9.34 million.

Completed in 2013, the 6,000-square-foot, two-floor round house is built around a central swimming pool. The first floor is open plan with a kitchen, dining room and two living rooms, as well as a sauna and bathroom. The second floor has five bedrooms, each with its own en suite bathroom.

Even though the design of the house is resolutely modern, Mr. Lelouch chose a traditional Norman exterior with white stones and half-timbering roofs. The estate includes a golf course and tennis court.

Since childhood, Mr. Lelouch, 76, has spent most weekends and holidays in Deauville, as many Parisians do.

In the mid-1960s, after one of his movies flopped, Mr. Lelouch drove to Deauville from Paris in the middle of the night. As he woke up on the beach, he began imagining the script of "A Man and a Woman."

Since then, the town has become ever more important to him and he has owned several houses there over the years. "Claude loves it; it is completely irrational," says his wife, Valérie.

Mr. Lelouch built the house to sell; the couple owns another house near the beach in the area.

Perche, Mansion Of 300 M² And Outbuilding On A 3 Ha Plot Of Land

Normandie, Elegant Townhouse Of 215 M² In A Residential Area

Authentic Mill Crossed Made Up Of 6 Buildings On A Land Of 6.5 Ha

Normandy, A 260 M² Mansion With Outbuildings