Construction of the world’s tallest tower set to begin 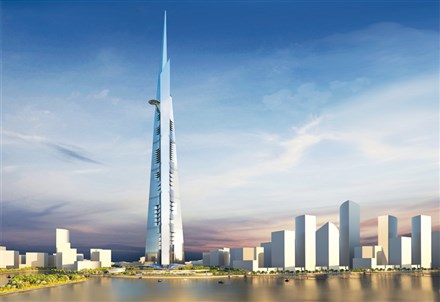 Construction of the Jeddah-based Kingdom Tower, which is set to be the world’s tallest building, is scheduled to begin next month.

Also known as Burj al Mamlakah, the USD1.2 billion project will surpass the current record of Dubai’s Burj Khalifa, which stands at 828 metres.

The mixed-use Kingdom Tower will be the first skyscraper to breach the 1-kilometre mark, but its exact height has not been disclosed to the public.

Designed by US-based architect Adrian Smith, who was also behind the design of Burj Khalifa, the new tower will be used for business, commercial and residential purposes. It is part of Saudi Arabia’s USD20 billion Kingdom City development.

Construction of the Kingdom Tower is scheduled to start on 27 April 2014 and will be completed in 63 months. British firms EC Harris and Mace will be managing the ambitious project, which was originally announced in 2011.