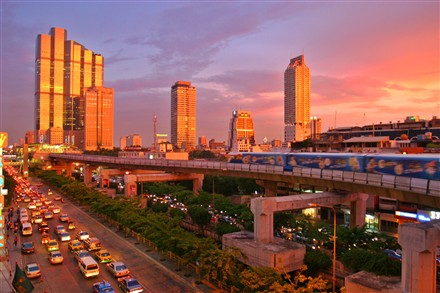 Property prices in Thailand are anticipated to grow by 5-10 percent in 2013, with condominiums in the THB0.8-3 million (US$26,000-98,000) price range still occupying the biggest share of the market, according to the Bangkok Post.

Positively, Anukul Ratpitaksanti, deputy managing director for asset management at Plus Property, said, "In 2012, Thai real estate saw significant growth in virtually all segments because consumer confidence was restored after the devastating floods in 2011".

Ratpitaksanti added that, "Moreover, the market is continuously stimulated by campaign after campaign of various interesting new properties offered by leading developers. Such campaigns were very effective for boosting sales".

As various new projects emerge from property developers in Thailand, the number of properties available for rent or sale is expected to rise in 2013.

According to Plus Property, a significant amount of new development projects will be located outside of the Thai capital, in surrounding provinces and established residential areas where public utilities are available.

Ratpitaksanti stated that factors with the potential to influence Thailand's real estate market depend heavily upon the government's National Development Master Plan.

The property expert predicts that, "...the government will encourage more real estate development in border cities that connect Thailand with neighbouring countries".

Ratpitaksanti summed up by saying, "This outlook, I believe, will become much clearer in the next few years once the Asean Economic Community (AEC) is formed."

This view was echoed by managing director and CEO of Pruksa Real Estate Plc, Thongma Vijitphonphun, who said the AEC would open doors for Thai property firms to expand both locally and in AEC countries.

Naporn Sunthornchitharoen, senior executive vice president of property developer Land & Houses Plc also supports property development outside of Bangkok, stating, "This is a time to change the property market to urbanisation rather than focus on Bangkok only".

Linked to property development outside of the Thai capital city, The Nation reports that the Thai government's plan to lavish over THB1.1 trillion (US$35.9 billion) from 2013-19 on infrastructure in the country will overhaul the environment for Thai real estate.

Plans for Thailand's infrastructure include 10 mass transit routes worth THB370 billion (US$12 billion). By 2015, six routes will be completed and the remaining four are scheduled to be completed by 2019.

In addition, the ministry are also planning several high-speed train routes with a combined total length of 767 kilometres worth THB780 billion (US$25.4 billion), linking the key locations of Chiang Mai, Nakhon Ratchasima and Hua Hin to the capital.

Plans also include the extension of the Airport Rail Link from Suvarnabhumi-Rayong. The ministry has also budgeted THB179 billion (US$5.8 billion) to spend on the construction of five new motorways next year, with a combined length of 707 kilometres.

Sansiri Plc made an assertive transition into the provincial property market this year. Srettha Thavisin, president of Sansiri, said the mass transit system has influenced developers into turning their sights from Bangkok to the provinces.

The mass transit links between Bangkok's central business districts and upcountry will make it easier to commute, and gives homebuyers alternative locations with convenient transport access.

Thavisin stated, "Up to 20 percent of our pre-sales worth THB42 billion (US$1.3 billion) this year came from the provinces that we entered this year. This is also a challenge for our expansion next year, as it creates a new market segment."

However, despite such a bright outlook due for 2013, smaller property developers in the provinces may struggle to compete against the expansion of dominating property development firms from Bangkok.