In recent years, Vietnam’s economic rise has increasingly caught the attention of foreign investors. Since its economic transformation in 1986, the country has made remarkable strides to become one of Asia’s top emerging markets. With a growing middle-class, increasing purchasing power and a healthy birth rate, Vietnam has promising demographics for growth. The country has a sustainable GDP growth rate of over 6% annually between 2014-2016, reaching its all-time high of $193.6 billion in 2015 (Figure 1). Vietnam has also made considerable efforts to ease regulations and attract foreign investors by reducing quota limits on foreign shareholders, providing easier access to the Vietnam stock market and opening real estate market to foreigners.

By now, the country has become the investment magnet within the ASEAN community and is on track to be among the fastest growing economies in Asia. Vietnam aims to transcend its neighbors Cambodia, Laos and Myanmar and to catch up to the ASEAN-4 - Singapore, Malaysia, Thailand and the Philippines. With a huge and dynamic population and a stable macro economy, Vietnam is becoming a promising market for industrial sectors, stock markets and real estate investment. 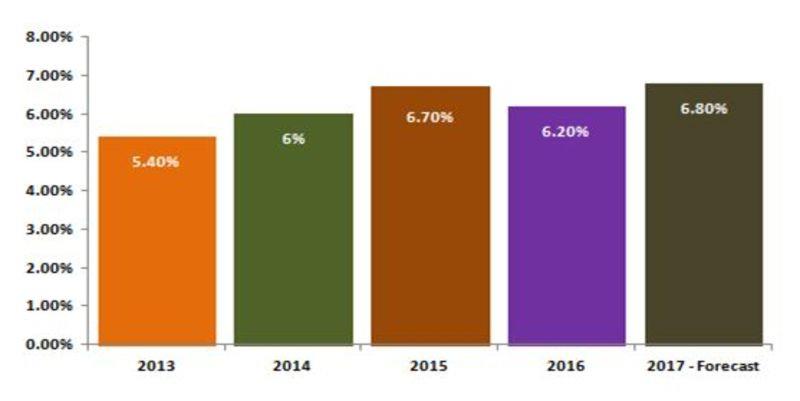 After a post-GFC slowdown, Vietnam has made considerable efforts to ease regulations and attract foreign investors over the past decade. This was visible in the opening of the general business environment by reducing quota limits on foreign shareholders, easier access to the Vietnamese stock market and opening of the real estate market to foreign investors.

Vietnam is widely regarded as the “next China.” The similar trajectory of development in terms of industry, largely based on increasing Foreign Direct Investment (FDI), a vast labour force at a cost of roughly 30% of that of China’s today and a strategic location within Southeast Asia make Vietnam the top contender for multi-national corporations (MNC’s) as an ideal location for new factories. 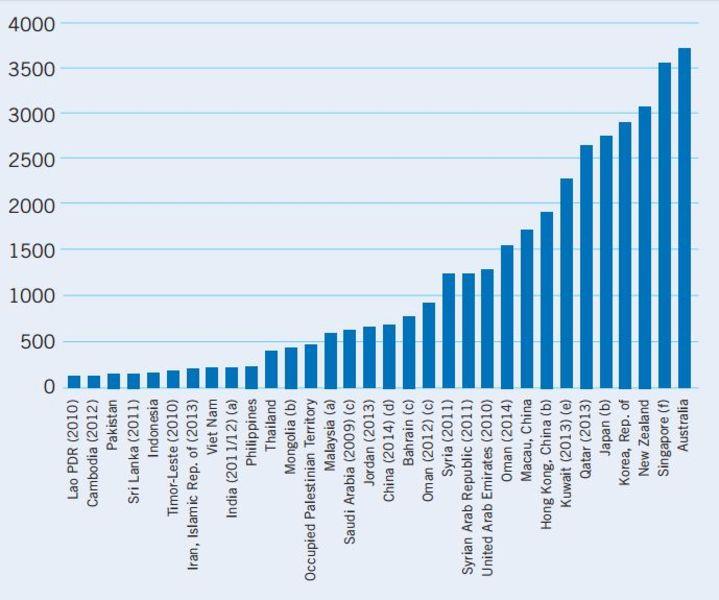 To spur FDI, the Vietnamese government has been boosting the country’s international profile and economic integration through a variety of free trade agreements and associations, most notably the ascension to the World Trade Organization (WTO) in 2007, followed by a flurry of free-trade deals with notable partners such as Korea, the European Union, Canada, China and the ASEAN Economic Community (AEC). The foreseeable future growth of Vietnam will be underpinned majorly by the continuation of these efforts.

In 2016, FDI has seen a 9% y-o-y increase from $14.5 billion in 2015 to $15.8 billion. The outlook remains very positive, demonstrated by the substantial q-o-q growth rate of 77.6% in newly registered FDI recorded in Q1/2017. South Korea, Japan, Singapore and China are among the most significant investors. While facts and figures speak a clear language, it is also evident in the ‘gold rush’ by foreign institutional investors aggressively entering the market to identify buying opportunities, be it in mergers and acquisitions of listed and non-listed companies, sites for industrial or commercial development or operating assets such as office buildings, hotels and resort.

However, the largest investment is seen in the manufacturing sector, particularly the garment and processing industries, where there’s a shortage of low-cost factory workers in the industrial heartland around Shenzhen and Guangzhou due to rising labour costs in China over the past decade. With razor-thin profit margins, these manufacturing businesses reacted swiftly to the challenges posed by the increasing cost of business and are now relocating en masse to Vietnam, a more promising destination.

There is continued interest and demand for relocation of factories from Chinese, Korean and Taiwanese businesses to Vietnam and the outlook is promising that this will translate in further GDP growth over the next decades.

The Vietnamese stock market has grown at a robust rate over the past decade despite the GFC interruptions and local effects felt in the economy. The VN index hit its record high for nine consecutive years since May 2008, bolstered by strong liquidity and the continued foreign direct investment in the country.

Figure 3: Number of Accounts in the Vietnam stock market by year 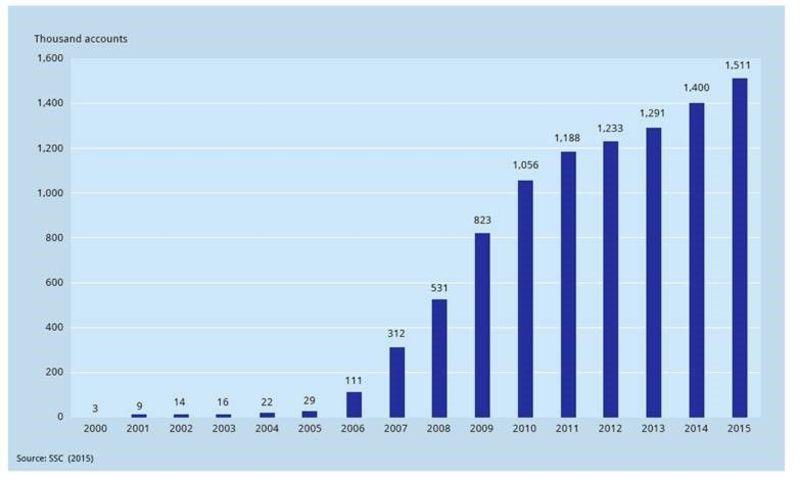 A new law that came into effect in July 2015 allows foreign investors to take up to 100% ownership of publicly listed companies across a variety of sectors and state-owned enterprises (SOE’s) if no other restrictions apply. This has created a surge in foreign investment in the Vietnamese stock market. Institutional and fund investors from financial centres in the region are seeing opportunities with the wave of large state-owned enterprises made available to public investment and stock-listed companies seeking capital for growth. Vietnam Airlines is an excellent example. An SOE undergoing transformation, Vietnam Airlines recently concluded a deal with Japan’s largest airline, ANA, who acquired an 8.8% stake in Vietnam’s state carrier. More of these acquisitions are expected when other SOE’s follow suit. With the underlying key fundamentals of the economy and the encouraging demographics, Vietnam has emerged as one of the most promising stock markets in Southeast Asia.

The real estate investment scene has been opened to foreigners since the implementation of the New Housing law in July 2015. Foreigners can own apartments and landed properties for 50 years, with an option of renewal for a further 50 years. There is a foreign owner quota limitation of 10% on apartment projects and 30% on landed properties of the total available units and foreigners married to Vietnamese are eligible for freehold tenure.

This has boosted demand for residential properties in key cities across Vietnam. Ho Chi Minh City (HCMC), the economic centre of the country, has seen an influx of foreign buyers who are keen on taking advantage of the attractive prices in comparison to the home property markets in Singapore, Hong Kong or Taiwan (Figure 4). In addition, a lack of exclusive luxury apartments for lease for the growing expat population translates into high rental yields and promising capital appreciation which these foreign investors are looking for. Many of the luxury projects reached foreign ownership quotas quickly which shows a continuing demand for buy-to-let properties in Ho Chi Minh City and Hanoi. 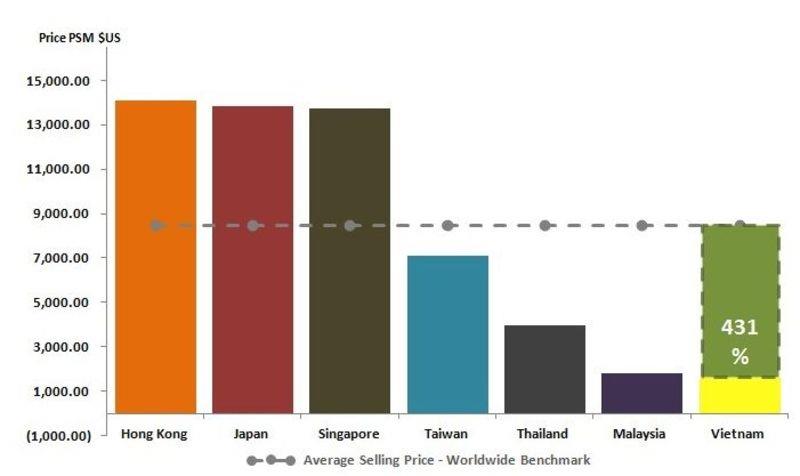 The resort markets are receiving an equal amount of attention from foreign buyers. As an extension of the tourism growth, with 26% Y-o-Y growth rate in numbers of inbound travelers in 2016, many regular visitors invest in a holiday home in the popular resort destinations. With direct flights to Singapore, Hong Kong, Korea, Japan and many other key cities across the region, Danang is becoming the most popular holiday market. This is spurring a new wave of resort properties along the Central Coast – Danang, Lang Co and Hoi An – as well as other holiday destinations such as Dalat, Nha Trang and Phu Quoc.

Vietnam is no longer an insider tip for foreign investors and the potential is enormous to redirect investment from neighbours such as Thailand and Malaysia. The continued investment into infrastructure from metro lines to airports and roads as well as the investor-friendly environment make Vietnam a top contender as ASEAN’s top investment destination. 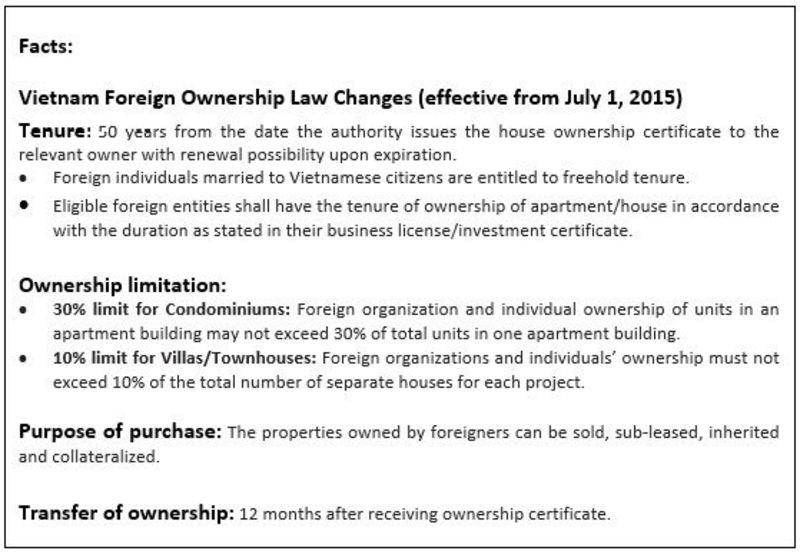